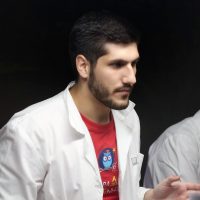 Dionysis is a Chemist, graduate of National and Kapodistrian University of Athens.

He is attending the M.Sc program of Polymer Chemistry at National and Kapodistrian University of Athens in collaboration with the Institute of Theoretical and Physical Chemistry of National Hellenic Research Foundation.

He considers an urgent need for society to understand the vital role of science in their daily life by interacting with the magic world of research and lab life. He has been a Science Communication Ambassador of SciCo (Science Communication Organization) since 2016. He has been employed as Awareness Manager in Researchers Night Greece 2019, he is currently working as a Chemistry Professor in the private sector and he is a Cofounder of the scientific public awareness site ScienceBehind.gr.

In addition, he has taken the lead as a scientific manager in areas such as design and implementation of numerous scientific and educational programs.